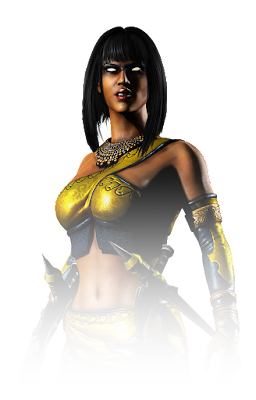 "I hope you don't think this is betrayal, old man. I mean...I know how this looks, and judging by your facial expression, I can imagine what you're feeling right now.

"But you have to realize--" and here she slowly leaned forward to look her former mentor directly in the eyes, "this was not about betraying you. This was never even about you, really. And please don't take offense to that statement...yours is a mind unlike any other. I've never seen such a profoundly insightful intellect coupled with the utmost deviousness. Your brilliance is an inarguable fact, and I am honored to have been your student."

It was strange to hear Tanya speak in such a manner; the ward he'd raised had been a gloomy, sullen young woman who mutely obeyed his rules and followed his lessons.

Her parents were diplomats, Shang Tsung suddenly remembered. As a sometime ambassador himself, Shang was well aware of what actors they could be.

She's been playing me this whole time.

Normally, he'd be shocked and enraged by the realization, probably would've been in this instance if it were not for the literal poisoned dagger she'd jammed into his chest without warning.

"I was going to ask the Emperor to restore my youth," the old sorcerer choked. His entire body screamed in agony as Shang struggled for breath, but he had to get this out.

Just once, it needed to be said aloud.

"All these years, I marveled that your beauty was like no other. Your face alone...," he trailed briefly, coughing up blood some blood before continuing, "could stop the very sun in the sky." His entire body shuddered, racked with coughing as blood stained his white silk collar, sliding down his chin and seeping into his long gray hair.

There was silence between as their ship gently rocked upon the Sea of Souls. The ship was turning left, which meant they were now passing the Kuantan Island and heading north up into the river. By tomorrow morning, they would dock at the Imperial Harbor.

Well...she would. She planned to throw his body overboard as soon as the sun went down.

Tanya leaned even closer now, firmly grasping the long handle of the dagger. The dagger was a culmination of years and years of hard work and painstaking research It had been crafted for just this purpose, from the metal used to the very poison coating the blade.

She usually had a silky, rather musical voice, yet now when she spoke, it was brittle.
"I praise your intellect and you compliment my looks?" she scoffed. "Old man, if at any point during this little exchange you've found yourself wondering how we got here...there's the answer."

She swiftly twisted the blade and shoved it deeper. Shang grunted under the force of her strength before finally giving in. As the life drained from his milky eyes, the light in the cabin also seemed to dim. Tanya quickly realized it wasn't magic, just the sun fading from the sky.

Silence filled the cabin, followed by cold as night settled in. She turned her attention to the cabin windows, rising from her ornate wooden chair and crossing the room to push the curtains aside. Their window faced uninhabited land. There was no light, save for the moon, and it was mostly obscured by inky clouds of indigo.

There would be no witnesses as she picked up his body, hoisted it over her shoulder and dumped it out the window. She lowered him into the water slowly, so as not to make a splash. When he was gone, Tanya turned back to the cabin.

Besides, Shang Tsung had far more enemies than he had friends, and not even the Emperor would mourn his passing.
A/N ~ As you can see by the date, I originally wrote this years ago, but could never go any further than this. Now I'm beginning to think I never needed to.
Email Post
Posted by MileenaXYZ Labels: Tanya vignette